I don’t think it is overreacting or hyperbole to tell you, my friends, that this nation is in grave danger of losing most, if not all of the democratic principles on which the nation was founded.  No, I’m not just talking about the former guy and his rambling ego, or the fledgling fools like Boebert, Gaetz and Greene who follow him faithfully with their wagging tongues just waiting to lick his boots on command.  They are a circus act.  But behind the curtain, I truly believe, there are people working to turn this nation away from democracy, away from freedom of such things as religion, press, and speech.

Remember back in May when the CPAC conference was held in Hungary and Hungarian autocrat Viktor Orbán was the keynote speaker?  That threw up red flags for me, especially in light of Orbán’s words … 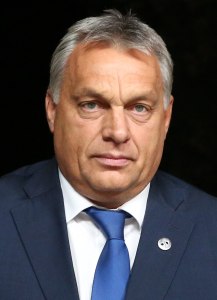 “We have to take back the institutions in Washington and Brussels. We must find allies in one another and coordinate the movements of our troops.

Have your own media. It’s the only way to point out the insanity of the progressive left. The problem is that the western media is adjusted to the leftist viewpoint. Those who taught reporters in universities already had progressive leftist principles.

Of course, the GOP has its media allies but they can’t compete with the mainstream liberal media. My friend, Tucker Carlson is the only one who puts himself out there. His show is the most popular. What does it mean? It means programs like his should be broadcasted day and night. Or as you say 24/7.”

Now fast forward … the next CPAC will take place in Dallas, Texas, on August 4-7.  I don’t know how the hell many of these conventions the ‘Conservatives’ need, but this will be the third one this year.  And guess who’s coming to dinner?  None other than Viktor Orbán.  According to Matt Schlapp, chairman of the American Conservative Union and a nasty piece of work …

“CPAC is proud to host Prime Minister Viktor Orbán. The fight against socialism is a global one.”

Mr. Schlapp wouldn’t know socialism from communism from neopolitan ice cream if it schlapped him upside the head!!!  It was he who, during the protests against the murder of George Floyd, claimed that Black Lives Matter was “…hostile to families, capitalism, cops, unborn life and gender.”  I have no idea where he came up with such mumbo-jumbo, but suffice it to show that he is not a nice person, nor is his wife Meredith, both of whom are close allies to the former guy.

But back to Orbán and his invitation to August’s CPAC.  Since coming to power in 2010, Orbán has effectively silenced Hungarian independent media and now controls virtually all of the country’s television, newspaper, and online media outlets.  Within months of becoming prime minister, Orbán had taken control of the judiciary and attacked the few financial institutions not under the control of his far-right Fidesz Party.

So-called conservatives in the U.S. have increasingly fawned over Orbán’s achievements, which in recent years have included an attack on LGBTQ and gender equality—with some measures related to the teaching of gender and sexuality in schools that closely echo the “Don’t Say Gay” bill recently passed in Florida.

In my view, having the May CPAC in Hungary with Orbán as the main speaker, and now having him cross the pond to speak yet again at the August CPAC is chilling.  It tells me that the Republican Party is seeking to install an autocratic government here in the U.S.  It tells me that they will stop at nothing to end the democratic principles that have been the foundation in this nation since 1787.  Stopping them is going to require the Democratic Party to find their backbone, to stop whining, get off their asses, and DO SOMETHING to help ensure voting rights and to make people aware of just what is at stake in November.

Today I see very little unity within the Democratic Party … too much critique and back-stabbing, a lack of unity, is demoralizing for voters at this, the most crucial time in our lifetime.  Yesterday morning I read that the majority of Democrats are not happy with President Biden.  Frankly, their critiques are largely unfair, for he is receiving blame even within his own party for things that are and always have been outside of his control.  But frankly, I don’t give a damn if you like him or not … we need to support him at all costs!  Now, let me put it this way … would you like to have someone just like Viktor Orbán in the Oval Office on January 20th, 2025?  Because if the Democrats don’t get their shit together, that is exactly what we’re going to have.

62 thoughts on “A Path We Must Not Travel”