Kids today, right?  I remember hearing when I was a teen that my generation was going to destroy the world, that we were lazy and had crazy ideas and likely ‘wouldn’t never amount to nuthing’.  Well, most of us turned out okay (no political commentary allowed on ‘good people’ posts), but the same is said, it seems, of every generation when they are young.  But, when you look beneath the surface, you just might find that today’s youth are pretty kind, caring people.

Just over a week ago, a group of high school boys in Rome, Georgia, were heading to school on a Friday morning when they saw a horrific car crash!  The boys – Treyvon Adams, 16, was driving, Antwion Carey, 16, Tyson Brown, 17, and Alto Moore, 16 – immediately stopped and ran to the car where they could hear a woman screaming for help.  Fellow teammate Cesar Parker, 16, was in another vehicle with his mother, and got out to help with the rescue. Another student, Messiah Daniels, also stopped to help.

“We just ran as fast we could to the lady and check on her to see if she was alright.”

They found the woman inside her car, trapped by doors that had been damaged in the crash and wouldn’t open.

“We were seeing she was in pain, she was screaming and asking us to help her. We used all our muscles. We’re pretty big people, we’re strong. We play football, so we lift weights a lot, but the door was just extremely bent and broke.”

Together, the teens were able to force the car’s passenger side door open, but soon realized they would need to open the driver’s side door to be able to free the woman.  They succeeded within a minute or so, and while his teammates were helping the woman from her car, Treyvon Adams ran to the other vehicle to check on its driver.  The woman was taken to the hospital and the boys proceeded on to school.  Says Adams …

They “just did the right thing.”  Oh yeah, teenagers – just a bunch of lazy morons, eh?  Tell you what … I want kids like this around me if I’m ever in trouble and need help!

Savennah Mendes-Rodrigues told the local news station she was studying at her house on Monday afternoon when she heard people screaming for help.

“I come out to the kitchen, and there’s a little kid on the floor, and they were like, ‘he fell in the pool’.”

Although she is only 19 years old, Savennah is certified in CPR and jumped right into action while waiting for the paramedics to arrive.

“I was really calm actually, I started chest compressions while everyone was panicking in the background. I wasn’t thinking about anything, I was just kind of like in the moment, like ‘oh my gosh,’ and afterward, I was like, ‘oh my god, oh I think I did just save him’.”

Paramedics confirmed that her quick, calm actions were likely what saved the child.

Amazing what they learn on television!

If you thought the 19-year-old who was certified in CPR was amazing, this one will knock your socks off! 7-year-old David Diaz Jr. is a second grader at Woodrow Wilson Elementary in Binghamton, New York. One day last spring, David and his classmates were in the cafeteria eating their lunch when he noticed a classmate sitting across from him was choking on his pizza.

David did what any 7-year-old kid would do … he jumped up, ran to his classmate, and began performing the Heimlich Maneuver.  Successfully, as it happens.  Teacher Kristin Korba was on lunch duty that day, walking through the cafeteria, and rushed right over as soon as she noticed there was a problem, but by that time David had successfully cleared the pizza and the child was able to breathe again.  When she spoke to David just a bit later, after ensuring that the classmate saw the nurse and was okay, she asked him where he learned to do the Heimlich!  His response?  He learned the life-saving skill while watching the ABC medical drama The Good Doctor with his father.  Says the younger Diaz …

“If anybody is choking or is in danger, you always have to save them. If you don’t, then that could be really sad.” 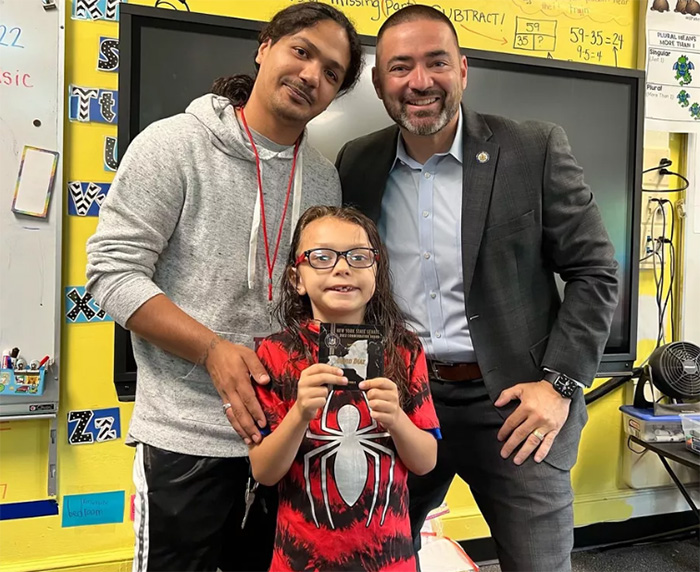 Critters can be good ‘people’ too, y’know

It happened in Nottinghamshire, England, where in the middle of the night, Sam Felstead, 42, suffered a heart attack in her sleep.  Her cat Billy gets credit for saving her life by jumping up and down on her chest and meowing loudly enough to wake her and alert her to the fact that she needed help!

“I was a bit shocked; I went to bed, and I felt fine. I’d even been out with my dogs, and I didn’t feel ill or have any pains whatsoever. Suddenly I woke up in the early hours covered in sweat and couldn’t move. Billy was on my chest and was meowing loudly in my ear. He doesn’t normally sit with me, but he knew something was wrong because he wouldn’t leave me alone. I do think he saved my life and so does everybody else around me.”

Two thumbs up for Billie!  When I read this story to daughter Chris, she said, “Ours would just eat us!”  Hmmmm … I’m not so sure … I think they’d save us, for who else is gonna feed them, clean up after them, and give them loving pats?