Even Teflon eventually gets old, wears out, and is no longer able to keep things from sticking.  The former guy has long been referred to as “Teflon Don” because he has lied, cheated, and stolen for the entirety of his adult life, yet has never had to pay a price.  In 2016 when he said, “I could stand in the middle of 5th Avenue and shoot somebody and I wouldn’t lose voters,” most of us scoffed and took it as just more of his hyperbole.  Since then, however, he has committed numerous crimes and treacheries against the nation, against We the People, and the Republicans continue to cheer and support him.  It seemed for a while that he was right, that he was somehow able to escape unscathed where the rest of us would be in prison, probably for life!  But this week, the tides seem to be turning.  Dan and Elliot sum it up rather nicely …

Trump Had a Day

Dan Rather and Elliot Kirschner 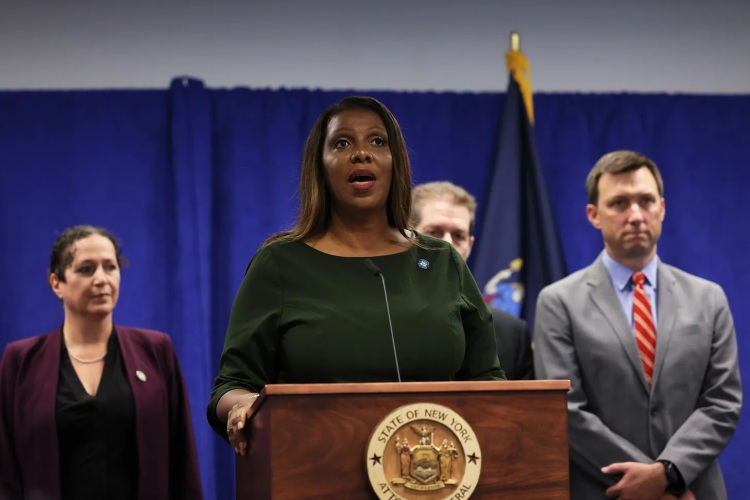 This could be one of his worst, but there may be far worse ones coming down the line if today turns out to be a preface and not a denouement.

This morning started off bad enough.

New York Attorney General Letitia James made it known that she was going to issue a “major announcement.” And she did not disappoint. The lawsuit she filed in state court is in essence a guided missile aimed right at the heart of the Trump family business. Calling the level of fraud she uncovered “staggering,” James outlined a list of facts that could have been a plotline in The Sopranos.

And it isn’t just the patriarch in her legal crosshairs. The three children who have been foisted upon the American public — Don Jr., Eric, and Ivanka — also earned starring roles in the court papers.

While this is a civil suit, that’s because James is limited from bringing criminal charges. She did refer her findings to federal prosecutors in Manhattan, but if they choose to press forward, they will likely have to get in line.

That’s because as rough as this morning’s news cycle was for Trump, more pain was in the offing.

This evening, the 11th Circuit ruled on the outrage that has been festering over the investigation into the classified documents the former president took (for still unknown reasons, at least publicly) to Mar-a-Lago.

If Trump was hoping that Trump judges at the appellate level would fall in line like Judge Cannon (the district judge who’s done legal backflips well beyond the bounds of precedent or prudence to accommodate Trump), he was sorely mistaken. Two Trump judges sided with an Obama appointee to issue a stinging rebuke of the lower court’s ruling — a ruling that most judicial experts had felt was about as serious as an episode of Laugh In.

I will leave it to legal scholars to parse the specifics of the lawsuits and rulings, but some big things are clear. One, Trump is in trouble. Big trouble. And not the kind of trouble that he can squirm his way out of by bloviating to Sean Hannity or browbeating Mitch McConnell. He’s on the defensive, and pressure is closing in from all directions.

The timing of these quickening drumbeats of scrutiny overlap with the final stretch of the midterm elections — into which Trump has vociferously inserted himself according to the only metric he knows: what benefits him. November thus is shaping up to be a referendum on Trumpism, to the dismay of many Republican officials. But those same Republicans have made a decision en masse to embrace Trump, at least publicly. From a cynical political calculus one can understand why. The Republican base is the Trump base, or maybe it’s more accurate to put that the other way around.

It is also clear that the core of this base is not enough to power Republicans to majorities in Congress. And yet, if the base stays home, Republicans also will lose.

With so much at stake, the unknowns hanging over Trump and his legal jeopardy are very consequential. How bad might this get for Trump and those who have fastened themselves to him? Will more be revealed? Will any Republicans decide that they need to separate themselves from Trump? Will that lead to disarray within the party as election day approaches? All of this is possible. But it is also possible that Trump skates by once again, at least for now. It is possible that Republicans take back Congress, and they frame their victory as a validation of Trumpism, nevermind what it means for the health and security of the country.

Right now it looks like a close election, but tides can shift, sometimes drastically. Support can crumble. What once looked like strength can be recast as weakness. Just ask one of the few people having a rougher go of it of late than Trump — Vladimir Putin.

Oh, and in other late-breaking news, the January 6th committee has come to an agreement to interview Clarence Thomas’s wife Ginni Thomas. Can’t forget about that investigation.

One imagines all is not quiet tonight in Mar-a-Lago.

9 thoughts on “Is The Teflon Wearing Out?”