Robert Reich’s first three sentences of his newsletter this morning echoes my own sentiments exactly.  I don’t want to write about him, don’t want to hear his name or see his ugly mug, and I will go one step further on the third point … I wish he didn’t exist.  Never in my 71 years has a single person disgusted and sickened me as much as the former guy.  But the reality is … we cannot afford to ignore him.

He looms over the 2022 midterm elections. He cannot be ignored or wished away.

I really don’t want to write about him any more. I’d rather not even think about him. Honestly, I’d rather forget he existed. 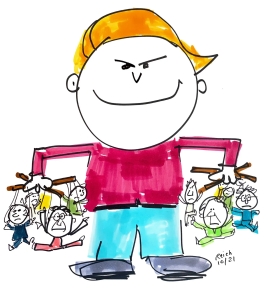 But he looms over the 2022 elections like a sword of Damocles. Trump continues to dominate all political coverage. In many respects, he is still the center of American politics — if anything, bigger and more dangerous than he was when he left the White House.

First, consider all the action in federal and state courts.

Just within the last two weeks, Trump has been subpoenaed to appear before the January 6 committee, his appeal to the Supreme Court challenging the FBI’s seizure at Mar-a-Lago of secret documents he stole from the White House was rejected, his former aide Steve Bannon was sentenced to four months in prison for contempt of Congress, a federal appeals court denied a request by Sen. Lindsey Graham to be shielded from testifying in an investigation into Trump’s interference in the 2020 election in Georgia, other aides were observed after testifying before a grand jury in the criminal investigation of Jan. 6, his name was featured in text messages read aloud at the Oath Keepers trial, and his decision to form a new company (Trump Organization II) was criticized by the New York attorney general, who is suing him.

Never before in history has a former president, his aides, and supporters in Congress been as entangled in legal proceedings stretching years beyond his administration. Never have the legal maneuvers attracted more media attention.

Second is the continuing speculation about whether Merrick Garland will indict him.

The Jan 6 committee has done an outstanding job, but it has also helped Trump become a more historically significant. As Politico’s John Harris noted,

“The usual journalistic crutch when assessing political legacies is ‘for better or worse,’ but in this case it is only for worse. Trump’s historic significance flows from how effectively he has made people doubt what was previously beyond doubt — that American democracy is on the level — and how brilliantly he has illuminated just how much this generation of Americans looks at one another with mutual contempt and mutual incomprehension.”

While the Jan. 6 committee has dismantled Trump’s deceptions and denialism surrounding the 2020 election, it has also helped build Trump into something larger than he appeared two years ago — a political force too serious to forget. That’s not a bad thing; we must not allow ourselves to forget what he has done to America. But it does cast his shadow over our future in ways few former presidents have ever managed.

Third is the groundwork for an undemocratic coup that Trump and his henchmen continue to lay.

That groundwork is being prepared step by step. A majority of Republican candidates for office in the 2020 midterms are election deniers, including several candidates for the crucial election jobs of secretaries of state and governors.

The tactics they and their supporters used in primary elections force us to brace for a range of new challenges in the upcoming midterms and in 2024, including disruptive poll watchers and workers, aggressive litigation strategies, voter and ballot challenges and vigilante searches for fraud.

He will almost certainly declare his candidacy for president in 2024 within the next few months.

Just as menacingly for 2024 and beyond, the Supreme Court has taken up the “independent state legislature” doctrine. If upheld, this doctrine would allow state legislatures to do exactly what Trump tried to do in December 2020 — appoint their own slates of electors, regardless of the popular vote.

Finally, Twitter and Facebook are poised to allow Trump back on — to continue to spread his lies on the largest megaphones in the world.

Trump is not only a sociopath. He is also a masterful conman. Social media will soon allow him to continue to spread his lies and hate. (Elon Musk has virtually guaranteed it for Twitter if, as expected, Musk takes over that platform. Facebook has signaled it will do the same.)

A sociopathic conman on social media is terrifying.

It is our terrible misfortune that Trump came to power and continues to infect America and the world just as the tangled weave of other crises — near-record inequality, bigotry (racism, misogyny, homophobia, transphobia, xenophobia), the climate, the pandemic — have made many Americans vulnerable to his demagoguery.

I didn’t want to write about him today or even think about him. But none of us dares turn our eyes away in revulsion.

Rather than ignore him, we must demand that Trump be prosecuted. Instead of pretending the poison he released into the American system is behind us, we must acknowledge that it is spreading.

As opposed to dismissing him, we must deal with him and the lawmakers who are enabling him head-on — and stop him, and them, through every non-violent means possible.