I watched about 20 minutes of the vote for speaker of the House of Representatives.  Rather boring, but I felt compelled to watch a bit of it, anyway.  Within those 20 minutes or so, it was clear that there will be a second vote.  Democrats unanimously voted for Hakeem Jeffries, while on the right-hand side of the aisle there were several votes for Andy Biggs of Arizona and a few for Jim Jordan of Ohio.  Neither Biggs nor Jordan will have more than a handful of votes, but it will be enough to keep Kevin McCarthy from sliding right on into the Speaker’s position as he had hoped to do … in fact, I hear he has already moved his belongings into the office!  The vote confirms what we already knew:  the Republican Party is in chaos.  Robert Reich takes it a step further and says the party’s over, that the legitimacy of the GOP, the initials of which once stood for ‘Grand Old Party’, is null and void.  I’m inclined to agree with him, if saner heads don’t step up and take control, and there probably aren’t enough of those saner heads left in the Republican Party. 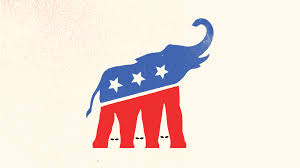 The Party’s Over: The end of the GOP

It has gone through three phases over the last four decades, and no longer has any reason for being

Today, as House Republicans convulse over electing their next Speaker, the civil war in the Republican Party comes into the open. But it’s not particularly civil and it’s not exactly a war. It’s the mindless hostility of a political party that’s lost any legitimate reason for being.

For all practical purposes, the Republican Party is over.

A half century ago, the Republican Party stood for limited government. Its position was not always coherent or logical (it overlooked corporate power and resisted civil rights), but at least had a certain consistency: the GOP could always be relied on to seek lower taxes and oppose Democratic attempts to enlarge the scope of the federal power.

This was, and still is, the position of the establishment Republican Party of the two George Bush’s, of its wealthy libertarian funders, and of its Davos-jetting corporate executive donor base. But it has little to do with the real GOP of today.

In the 1990s, Newt Gingrich and Fox News’s Roger Ailes ushered the Republican Party into cultural conservatism — against abortion, contraception, immigration, voting rights, gay marriage, LBGTQ rights, and, eventually, against teaching America’s history of racism, trans-gender rights, and, during the pandemic, even against masks. At the same time, the GOP was for police cracking down on crime (especially committed by Black people), teaching religion with public money, for retailers discriminating against LBGTQ people, and for immigration authorities hunting down and deporting undocumented residents.

Gingrich and Ailes smelled the redolent possibilities of cultural conservatism, sensed the power of evangelicals and the anger of rural white America, saw votes in a Republican base that hewed to “traditional values” and, of course, racism.

But this cultural conservatism was so inconsistent with limited government – in effect, calling on government to intrude in the some of the most intimate aspects of personal life – that the Party line became confused, its message garbled, its purpose unclear. It thereby opened itself to a third and far angrier phase, centering on resentment and authoritarianism.

The foundation for this third phase had been laid for decades as white Americans without college degrees, mostly hourly-wage workers, experienced a steady drop in income and security. Not only had upward mobility been blocked, but about half their children wouldn’t live as well as they lived. The middle class was shrinking. Good-paying union jobs were disappearing.

Enter Donald Trump, the con-artist with a monstrous talent for exploiting resentment in service of his ego. Trump turned the Republican Party into a white working-class cauldron of bitterness, xenophobia, racism, anti-intellectualism, and anti-science paranoia, while turning himself into the leader of a near religious cult bent on destroying anything in his way – including American democracy.

A political party is nothing more than a shell – fundraising machinery, state and local apparatus, and elected officials, along with a dedicated base of volunteers and activists. That base gives fuels a party, giving it purpose and meaning.

Today’s Republican base is fueling hate. It is the epicenter of an emerging anti-democracy movement.

The Republican Party will continue in some form. It takes more than nihilistic mindlessness to destroy a party in a winner-take-all system such as we have in the United States.

But the Republican Party in this third phase no longer has a legitimate role to play in our system of self-government. It is over.

What we are seeing played out today in the contest for the speakership of the Republican House involves all of these pieces – small-government establishment, cultural warrior, and hate-filled authoritarian – engaged in hopeless, hapless combat with each other, and with the aspirations and ideals of the rest of America.

39 thoughts on “Robert Reich Says “The Party’s Over””