“We have people coming into the country, or trying to come in — and we’re stopping a lot of them — but we’re taking people out of the country. You wouldn’t believe how bad these people are. These aren’t people. These are animals.” – Donald Trump, Wednesday 16 May 2018

“Frankly, I don’t think the term that the president used was strong enough.” – Sarah Huckabee Sanders, Thursday, 17 May 2018

Trump and Sanders both claim that he was referring to members of the gang known as MS-13.  Perhaps so, but it doesn’t matter, for it is not appropriate for the ‘man’ who is supposed to set an example, as leader of a republic, to refer to any human being as an ‘animal’. And in context, it sounded as if he were referring to immigrants in general. But either way, words are important, especially when they are heard by millions of people, and most especially when they are uttered by a man who is supposed to be the leader of a nation of more than 300 million people.  So, is it any wonder that …

New York City attorney Aaron Schlossberg probably wishes he had a chance for a ‘do-over’ of Wednesday.  The man went into Fresh Kitchen in midtown Manhattan on Wednesday, presumably to get some lunch.  Something must have given him a brain fart, though, for all of a sudden he went off on a rant to one of the employees of the eatery, yelling …

“Your staff is speaking Spanish to customers when they should be speaking English. Every person I listen to: He spoke it, he spoke it, she’s speaking it.”

He then threatened to call immigration enforcement authorities on the employees, alleging, apparently with no evidence beyond the language that they were speaking, that they were not legal residents of the country.

Obviously somebody peed in his corn flakes that morning.

A bystander captured the entire rant on video, posted it on Facebook, and from there it went viral.  Two New York lawmakers, Representative Adriano Espaillat and Bronx Borough President Ruben Diaz Jr., happened upon the video and filed a misconduct complaint …

“What was witnessed in the vile video from Mr. Schlossberg, which has since gone viral, is a humiliating and insulting attack on the more than 50 years of progress that this nation has made since the civil rights movement. The audacity to profile and verbally assault innocent bystanders and customers in a public commercial location is a violation of our civil society.”

Ironically, Schlossberg’s law firm advertises that it can take phone calls in four foreign languages, and Schlossberg himself claims to speak Spanish.  Corporate Suites, the company that operates the business center in which Schlossberg leases office space, has terminated its agreement with him. According the company’s president, Hayim Grant …

“His actions are just not consistent with our community and rules and regulations,” the company’s president, Hayim Grant, told the Post. “It’s totally contrary to everything we believe in as a company and personally.”

A petition has been started on Change.org calling for Schlossberg to be disbarred, and has already gained more than 10,000 signatures. A GoFundMe page has been set up to raise money to send a mariachi band and taco truck to Schlossberg’s office.

Or is it any wonder that … 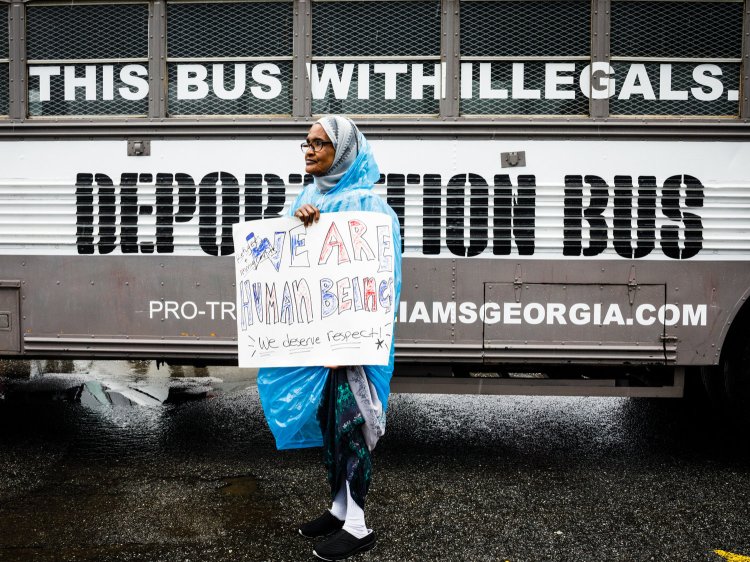 Michael Williams is currently a Georgia State Senator who is running for governor of Georgia this year.  Since he is currently polling in last place, he decided to spice things up a bit, rally the troops, so to speak.  Or, perhaps I should say ‘rally the racists’.  Williams has converted a school bus (see above) to a racist-mobile, complete with slogans like “FILL THIS BUS WITH ILLEGALS” and “DANGER! MURDERERS, RAPISTS, KIDNAPPERS, CHILD MOLESTORS [sic], AND OTHER CRIMINALS ON BOARD.”

Nice, huh?  This week he launched a ‘bus tour’ with scheduled stops at Georgia restaurants, including at least 10 Cracker Barrels.  Only thing was, he didn’t clear it with Cracker Barrel, and it is definitely not okay with them!  Cracker Barrel issued the following statement:

“We are not sponsoring this event or supporting Mr. Williams’ campaign stops in any way, and per our company policy, we will not allow him – or any political candidate—to host an event on Cracker Barrel’s property. We take pride in showing our communities and our country that the hospitality we practice is indeed welcoming and inclusive to all.”

Another restaurant where he planned to take his road show, Brian’s Buffet in Griffin, Georgia issued a one-sentence statement on its Facebook page:

“We do not support Michael Williams running for governor and he is banned from the parking lot.“

So far, Williams’ bus tour has been marked by protests from people who want him there even less than the restaurants do. On Wednesday, the first day of the tour, Williams allegedly threatened the throng of protestors, threatening to run them down with his bus and have them arrested.

Last summer, Williams posed with a white supremacist militia group, where he urged voters to “unite against Sharia law.”  I am always amazed when people in the U.S. protest against something that is not a problem in the U.S. and about which they know almost nothing.  Anyway, one of the men in the picture, Alex Ramos, was convicted this month for his role in beating a counter-protester at the Unite the Right rally in Charlottesville, Virginia last August.

And is it any wonder that …

In Pennsylvania, U.S. House Representative Mike Kelly is very upset that Democrats think racial discrimination is still a problem.  (So is boot-licking, Mikey)  Needless to say, he voted in favour of rescinding regulations put into place to protect minorities from discrimination in auto-lending.  Coincidentally, Kelly owns a group of auto dealerships.

Referring to the debate on the House floor over the legislation …

“I just think that if you come to the floor and there are 60 minutes to debate. 30 minutes on each side. But as I was sitting there, I had 30 minutes of Democrats coming down and talking about how bad automobile people are because they discriminate against nonwhite buyers. I said that’s not America. We don’t talk about those things.”

And is it any wonder that …

Donald Sherman, was pushing his son Caleb in a stroller through a local park in Washington D.C., and instead of having a peaceful and very normal walk through the park he was approached by a police officer who told Sherman she received a call about a “suspicious man” with a baby.  Sherman said there had been only one other person in the park that morning, a white lady on a bicycle who veered off as he and his son approached.  Apparently she saw fit to report the man and his baby.  For walking.  In a public park.

These are only four incidents from the past week.  There are more, but I am out of time and space for the moment.  When the ‘man’ in charge says it is okay to hate based on race, skin colour, or whatever other criteria, then those who follow his every word, take it to heart.  Yeah, words matter, folks.