Today’s good people post is a bit different than my usual fare, as you’ll see, but I don’t think there can be any argument that Rob White is … was … a good people.  Let me tell you a bit about Rob …

According to his wife, Roberta, he was an unconventional sort.  When they first met, Rob was living in a warehouse, where he made the elaborate paper mâché sculptures that he crafted throughout his life.

“We didn’t even have a kitchen. It wasn’t like a nice loft warehouse. I mean, it was an industrial warehouse on the south side of Edmonton. He was extremely unconventional. He was very eccentric. He never held onto things — like if something was given to him, he would just give it away again.”

When it came time to get married, they “hijacked” another ceremony and gave their vows with red twist ties fashioned into rings.  Later on, when Rob needed a more conventional job, he became an industrial scaffolder, despite a fear of heights.  Rob never gave in to fear.  His two sons, Strider and Alliance, recall what their dad taught them about fear …

“Whatever you’re scared of, go out and master it. Fear is a beacon, run as fast as you can towards it.”

Rob and Roberta married in 1994, started a family and eventually settled in Edmonton’s Parkview neighborhood on a street named Candy Cane Lane.

Last Tuesday, April 6th, Rob was walking his dog, Ace, when he saw a woman’s dog run onto the partially frozen Saskatchewan River.  He quickly tied Ace to a tree and ran to help.  Walking across the ice, Rob was able to grab the dog, but before they could head to safety, the ice broke beneath his feet … man and dog were plunged into the icy river. 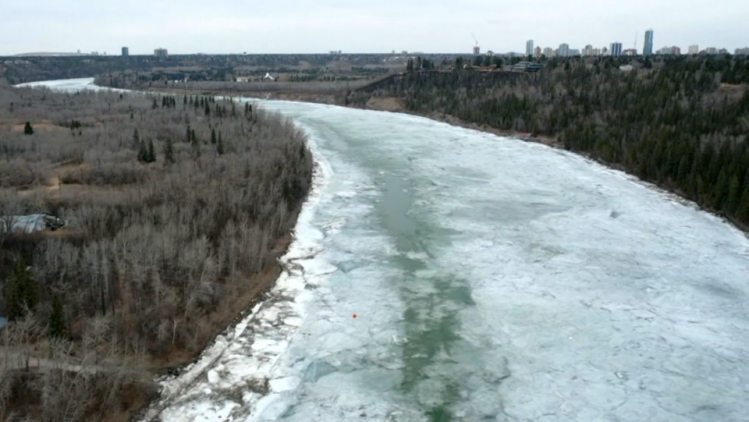 Rescue crews arrived within minutes, and while they were able to rescue the dog, they eventually lost sight of Rob and just over three hours later, the search was called off, with Rob being presumed dead.

Now, you may be thinking any number of things at this point, but this was only Rob’s final act of trying to help someone.  Reminisces from his best friend, Chris Barrett, give us a full picture of the person that Rob was …

“He saw somebody in distress. Somebody who needed help. He tied his dog up and went out and did it.  In the paper, all kinds of people are second-guessing what you would do, what you wouldn’t do, but that’s Rob. It wouldn’t have been a thought. Kindness was his brand.”

Rob and Chris met in the 80s, a period of time when both were jumping from one hot business idea (or so they thought) to the next. White’s involved a hot tub rental company.

“I said sometimes he was basically his own cartoon. He’s his own comic book. In your entire life, if you’re lucky, you meet one person like that.  Rob was embarrassingly kind, so there’s zero surprise he would do something like that.  When I say embarrassingly kind, I don’t mean that in a bad way. I mean, you look and go, ‘Wish I could do that.’ You know, what he can do so easily. Because he was so authentic.

When I think about today, and when I look around social media, and I look at what people are focused on, with whatever’s going on – you know the whole country is grieving right now over the last couple years, for example – why does a story like this stick out the way it is? It is because there is nothing else other than a guy who was an amazing person who just did that. Just gave it up. That random act of kindness. How can you not be interested in that story?

I’ve seen him so many times where he was always going to do the right thing and didn’t need prodding. He’s the kind of the dad we all wanted to be.”

As I said in the beginning, this is a bit different than my usual ‘good people’ posts.  Our friend rawgod sent this to me a few days ago, suggesting Rob White for a spot in a good people post, and at first I was hesitant.  I’ve never, to the best of my recollection, done a post about someone who died while being a good people, and it seemed that it would add a bit of sorrow when I try to make the good people posts uplifting.  But, as I read several stories about Rob, what he did, and the person he was, I felt drawn in by him, came to respect the life he led and his unselfish devotion to helping, whether another person or an animal.  R.I.P. Rob White … I wish that everyone had a heart like yours.