Today’s story is a good news/bad news sort of story.  I like to think the ‘good’ part outweighs the bad in the long run, and gives us hope for humanity.  I don’t know … what do you think?

It was just after 5:00 a.m. last Saturday morning, and people were arriving for Fajr, early morning prayer services, at the at the Dar Al Farooq Islamic Center in a suburb of Minneapolis, Minnesota. About 20 people had entered the mosque when a fire bomb was hurled through the window, shattering windows and causing extensive damage.  Fortunately, nobody was injured, but certainly the intent of the criminal was to destroy, maim, and even kill.

The center had been receiving threatening phone calls for some time, according to Mohamed Omar, Executive Director for the mosque. “… people talking about us, telling us, accusing us that we shouldn’t be here, that we are like a burden to the community or we are like harming it. We’ve had some threats and comments. People walk to our door, bang on our door and had foul language. With the country’s climate and rhetoric going on, we feel [we’re] in the middle of the tension.”  Omar cited hateful comments on Facebook including some that read, “Islam needs to be eliminated like the black plague,” or “maybe they will start leaving now. Keep up the good work.”

The FBI is investigating the bombing and says it was a form of a pipe bomb, but with “more sophistication” than expected. There were no security cameras at the mosque, as the congregation is made up mostly of Somali immigrants and does not have extra funds for such things. The FBI also said in a statement that they want to “assure the community that this investigation is our top priority and we continue to work to determine who carried out this crime and why.”  Let us hope so.

The good news in all of this is the community and the support they have shown.  According to a post by Robert Reich …

“Members of a local Catholic church delivered over 200 notes like the one below. On Sunday, a steady stream of people stopped by to leave flowers and express their sympathy. Erik Stoltenberg brought along his 4-year-old daughter, telling the Twin Cities Pioneer Press, “I explained to her that people attend things that are like our church but different and that some people sometimes don’t like other people for bad reasons and that it was important for us to come and show our support as a community.” People have also donated over $50,000 to a GoFundMe campaign to help pay for repairs.” 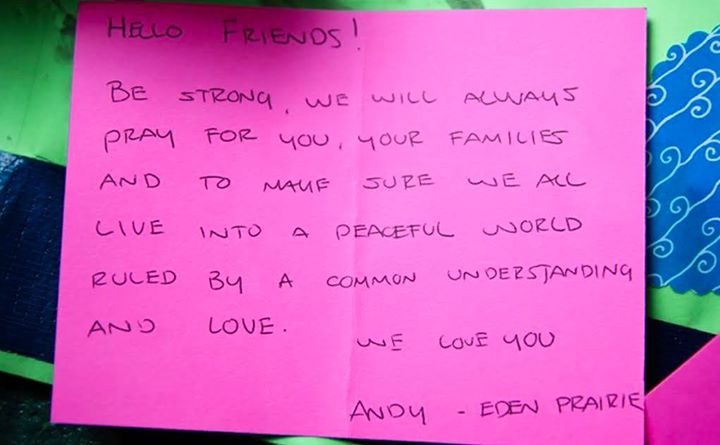 The GoFundMe account has thus far raised $67,275 in just two days, and has been contributed to by 1,629 donors!

Minnesota Governor Mark Dayton condemned the act and ‘called a spade a bloody shovel’ when he called it an act of terrorism.  “What a terrible, dastardly, cowardly terrible act this was that was committed yesterday. As someone said in the meeting, if the roles were reversed, it would be called a terrorist attack. And that’s what it is, an act of terrorism. That action is despicable and hateful, but it does not represent who Minnesota is. It does not represent the vast majority of the people who live in this fantastic state.”

The only response to this terrorist act from the entire Trump administration came from the Department of Homeland Security in a canned statement:

“Acting Secretary of Homeland Security Elaine Duke is aware of the explosion today at a mosque in Bloomington, Minn. We are in close contact with federal, state and local authorities and local community leaders as the investigation into this matter continues. The Department of Homeland Security fully supports the rights of all to freely and safely worship the faith of their choosing and we vigorously condemn such attacks on any religious institution. We are thankful there were no injuries, but that does not diminish the serious nature of this act.”

Not so much as a tweet from Donald Trump, nor any of his mouthpieces. No condemnation.  No words of empathy or support.  Nothing.

I commend and am proud of the good people in the community, of the 1,629 people who have contributed their hard-earned cash to help repair the mosque; of the people who showed up with flowers, checks, and those who simply brought a hug and a kind word.  These, folks, are the people who define this nation, who give us hope that we might yet overcome the trash that currently resides in the White House and the trash … white supremacist trash … who have the unmitigated gall to believe they have a right to condemn people simply because of their religion or ethnicity.  White supremacy?  HAH … white trash is a better description.  Donald Trump has yet to comment on the bombing, but can you imagine the outrage he would be spewing if a person of Middle-Eastern ethnicity had done this to a white, Christian church? His silence speaks volumes.