If the old adage, “United we stand, Divided we fall” is true, the United States of America is in for a hard fall and one that will change the nation, perhaps for the better, perhaps not.  Not since the Civil War has this nation been so ideologically divided and has hate and mistrust filled every venue.

Senator Jeff Flake said last week that the general fiasco that the Kavanaugh confirmation process has turned into is dividing the nation.  While it is certainly widening the Great Divide, I would argue that the gap was already, before Anthony Kennedy announced his retirement, wider than the Grand Canyon.  There is no longer a middle ground, civil discourse has left for greener pastures and tensions have never in my lifetime been higher.

Today, there is “they” and “we” … you are either one or the other.  You may remember me mentioning my dear friend Brian, the only sensible republican I know.  Even he and I have given up on carrying on civil political conversations, for we value each other’s friendship and see how easily it could be shredded.  He rarely reads my posts any more, and I skim over his Facebook posts, unless they are humour.  Last night, however, my angst being at an all-time high, I did respond to this on Brian’s page … 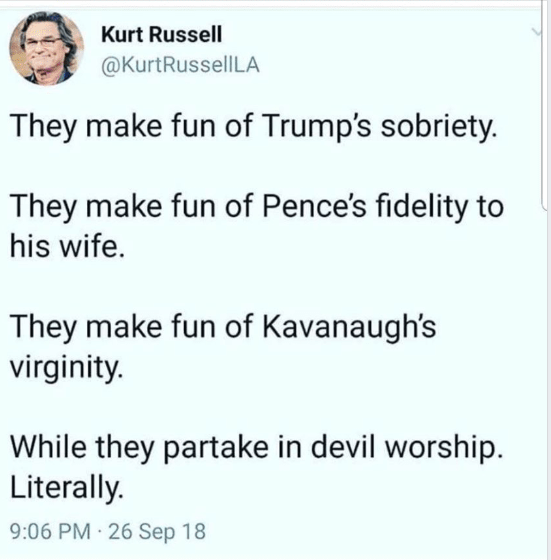 And my response was, under the circumstances, I thought reasonable:

“We don’t make fun of Trump’s sobriety, though I might question it in light of his behaviour. We don’t make fun of Pence’s fidelity, but we are appalled by Pence’s harsh anti-LGBT rhetoric and bigotry. And we don’t mock Kavanaugh’s ‘virginity’, but for the fact there is credible evidence that he was not a virgin at all, but rather a party-boy. “We” don’t wish the next several decades of life-or-death decisions in this nation to be made by a man who cannot even control his temper in a professional setting and who has lied to the U.S. Senate. But then, ‘we’ don’t want a dishonest, misogynistic, temperamental ‘man’ in the White House, either, but for the time being we are stuck with it. Sorry, Brian, but sometimes I just have to speak out — no disrespect toward you at all.”

Brian was fine with it, one of his friends not so much, but that is neither here nor there.  The thing, I think, that offended me most was the “they” thing.  It’s like some highly contentious sports tournament where it’s They vs Us, Liberal vs Conservative, Democrat vs Republican, Blue Jerseys vs Red Jerseys with ugly maga hats.  My grandmother had a tattoo with a number on it.  Should we go that route and make everybody get a tattoo either in blue or red, so we can see at a glance what “tribe” a person belongs to?

Brian’s friend, who I will not name, shot back wanting to know if I support Hillary and then drew some imaginary line whereby he concluded that I must be racist!  In the words of my late friend, Brenda:  HELLO HANNAH!!!  (That was her form of an expletive) Or as our friend Roger has taught me to say:  FORNACAZONI!!! 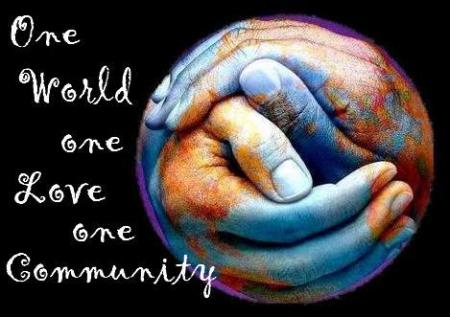 What are we doing to each other, people?  Ten years ago, I couldn’t have told you if any one of my friends was a democrat or a republican … it just didn’t matter.  Ten years ago, we didn’t talk about ‘tribalism’; we had family, we had friends, some closer than others, we had co-workers, but we didn’t ask people to qualify their eligibility for friendship by political party affiliation, or even religion or skin colour.  At least, most of us didn’t.  “They” was a term reserved for an enemy, perhaps the Russians, perhaps the Chinese, but we were all “We”.

I am so angry with “Us”, and by “Us”, I mean all of us, democrat, republican, male, female, every religion, every ideology.  Instead of listening, all we are doing is yelling, insulting and bullying.  Instead of trying to get our views across so that they can be debated, so that we can learn from each other, we are yelling and pointing fingers and blaming everybody, even dead people!  We all have some good ideas, and most of us also have a few really rotten ones, but unless we listen, we will never know.

How do we put the greater good ahead of our individual desires?  This nation has already crossed the line from a democratic-republic to an oligarchical-plutocracy.  We now have a government run by the very few ultra-wealthy.  Decisions made at the highest levels that will affect each and every one of us, are made by wealthy people whose only goal is to get wealthier.  Elections are subject to Russian interference, for Putin sees it as being in his interest to keep Trump’s boot-lickers in Congress and to keep the nation divided. Elections are also subject to nefarious games such as gerrymandering, voter intimidation and voter suppression to attempt to keep certain groups, such as the poor and minorities away from the polls, or at least dilute their vote.

So, how is our voice to be heard?  We write and call our elected officials, but at best we receive a standard form letter in response.  Today, we have more avenues of communication … instantaneous communication … than ever before, yet we cannot make ourselves heard by the people who ought to be listening.  And so, we fight amongst ourselves.  And such may well be the goal of those in power.  I began this post with a quote:  United we stand, Divided we fall.  I use another quote to leave you with another thought:  Divide and Conquer. 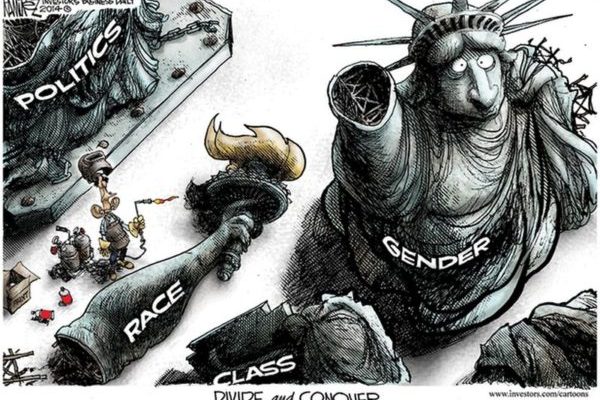 “Divide and conquer” – attributed to Philip of Macedonia

“A house divided against itself cannot stand” – Abraham Lincoln, June 1858

Regardless of whether you are republican or democrat, conservative or liberal, I am asking you today to suspend disbelief for a few minutes and give some thought to an idea that awakened me this morning.

The great divide, as I have called it for the past year, has been in the making for nearly a decade, having its origins, I believe, in the formation of the “Tea Party movement” which appeared to be mainly a response to the election of the nation’s first African-American president, Barack Obama. Throughout President Obama’s two terms, there was push and then push-back, until the divide widened and then widened some more.  Already, by 2015, any political discussion was likely to turn into a hostile argument, Congress was rendered ineffective by extreme partisanship, friends and families parted ways, and the nation was primed for one of two things:  a large-scale catastrophe that would bring the people together again, or a manipulator who would further widen the gap between ideologies.  Enter Donald Trump.

While I do not credit Trump with a large amount of intelligence, I do credit him with being devious, for it is what he has spent his life doing.  And he had some help from at least one autocratic leader, Vladimir Putin, who is intelligent as well as devious.  It turned out to be a winning combination for Trump, though a losing one for the people of the United States.

Donald Trump quickly realized that the most polarizing issue in the U.S. was immigration, and his entire campaign revolved around that issue.  He had people chanting “build that wall”, while others were protesting at his rallies in support of human rights.  He claimed we would ban Muslims, for they were terrorists, and we would keep out Mexicans, for they were ‘rapists and murderers’. At its core, the immigration debate is not, as Trump has claimed, about either the economy or national security.  At its core, the immigration debate is about racism, pure and simple.  Donald Trump played his cards well. And we became ever more divided.

Congress, having a republican majority in both the House and the Senate, is also divided, but in recent weeks, there have been some signs that members of Congress are willing to reach across the aisle and work together, for the health care debacle proved that without some bi-partisan effort, nothing could be accomplished.  This was good news for the nation, good news for the people, but bad news for Donald Trump, for his goal is to keep them apart, to keep them fighting on every issue.  And so, he reached out to Schumer and Pelosi, knowing that such a move would anger the far right, the radical elements in his own party.  He never intended, I think, to actually follow through in efforts to work with the democrats, and that, from his perspective, was the beauty of the plan.  He annoys a good portion of his own party, then turns 180 degrees around and makes demands that are contrary to what he discussed with Schumer and Pelosi, thus annoying the democrats.

If there is one thing Donald Trump understands, it is how to bring out the worst in people, how to pit them against one another.

I began this post with three quotations that I turn to now.

“Divide and conquer” – the key elements of which are: creating and encouraging divisions to prevent alliances; fostering distrust and enmity; and encouraging meaningless expenditures that reduce the capability for other things.  Immanuel Kant, in his Perpetual Peace: A Philosophical Sketch, cited three political maxims for an autocrat: Divide et impera – divide and conquer; Fac et excusa – Act now, and make excuses later; and Si fecisti, nega – when you commit a crime, deny it.  Trump has done all three of these to one extent or another.

“A house divided against itself cannot stand” – The North and the South had come to hold distinct opinions in the question of slavery, and now the issue had come to permeate every other political question.  Lincoln believed that unless the issue of slavery was resolved soon, the Union would no longer be able to function.

This is not the first time our nation has been so divided, however it is, I believe, the first time that our divisions are being manipulated by one person for the purpose of increasing the power of the presidency at the cost of reducing the power of the people.  Yes, we still have the vote, but Trump is taking steps to manipulate that, also, with his voter fraud commission that, given the people who are in charge of the commission, seems likely to remove many, perhaps millions, from the voter registration rolls.

I said early on that Trump would not like the confines of the office of president, that he would not like the congressional oversight and the rules that bind his office.  I believed then, as I do now, that his goal is and has always been, to be a ruler rather than a leader.  I cannot predict the outcome, for I still have hopes that the system of checks and balances will hold, that the people will begin to awaken and see what is happening to this nation, and that Trump will be removed from office before his power is such that he cannot be removed.  That is my hope. The end result depends on each and every one of us.