Amazon is one of the few companies whose business has surged during this time of coronavirus pandemic.  More and more people are ordering household supplies and even food that they cannot find in their local stores, or just to keep from having to spend much time in the local stores.  Amazon announced last week that they will be hiring up to 100,000 additional workers to cover the increased demand.  And yet …

Amazon maintains one of the stingiest paid sick leave policies among major corporations.  To add insult to injury, Amazon under CEO Bezos is requesting donations from their customers to cover sick leave for their employees!  Think on that one for a minute. 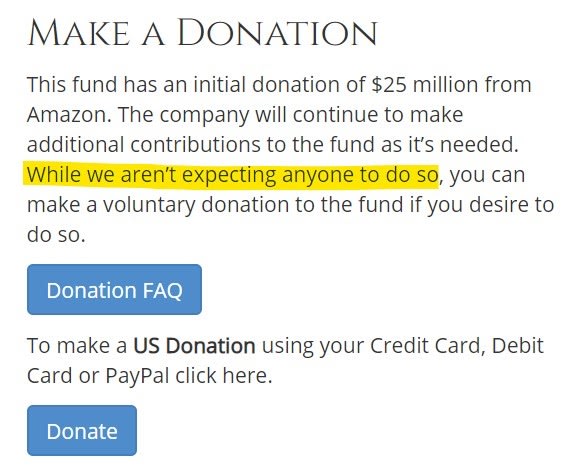 The man with more money than anybody deserves or needs, more money than he could possibly ever spend, is too cheap to fully cover his employees sick leave, but expects his customers, many of whom are currently laid off from their jobs, to pitch in.

As if that weren’t enough to make you want to dump a pan of hot berries on his bald pate, he also managed to profit ‘bigly’ by selling $3.4 billion in Amazon shares just before the stock market peaked in mid-February.  Can we say, insider trading?  Had he held onto those shares until this week, he would have lost $317 million … not that he’d even notice, for that’s pocket change for him.

I have been an Amazon customer since 2003, have a monthly standing order for household cleaning supplies, and frequently order other things we need, but … I’m going to start looking for alternatives.  Today!

Having just concluded a rant that has left me with a terrible headache, I am going with some bits ‘n pieces from last night’s news.

Thumbs up to the New York Times for refusing to publish government handout pictures.  Reporters have not been allowed in to the makeshift shelters and detention centers where the 2,000 children separated from their parents are being held.  Instead, the government provided pictures for news agencies to use, but the New York Times refuses to publish them.  I applaud their integrity!  There was a time I might have trusted the government, but not today.

Oh, and on this topic …Kirstjen Nielsen, Secretary of the Department of Homeland Security (DHS), told a group of reporters yesterday that the separation of children from their parents at the border does not constitute abuse because …

Sheesh … the woman cannot even speak proper English!  Videos and television, so … no abuse.

Yesterday, Trump announced that he would direct the Pentagon to establish a sixth branch of the armed forces dedicated to protecting American interests in outer space.  I thought for certain this had to be a joke, but nope.  According to the New York Times …

“During a speech at a meeting of the National Space Council, Mr. Trump announced plans to protect American interests in space through monitoring commercial traffic and debris, initiatives he said would be “great not only in terms of jobs and everything else, it’s great for the psyche of our country.”

Minutes later, the president zeroed in on Gen. Joseph F. Dunford Jr., the chairman of the Joint Chiefs of Staff, and tasked him with the undertaking of creating another branch of the military.

“General Dunford, if you would carry that assignment out, I would be very greatly honored,” Mr. Trump said from the podium, after searching for him in the crowd.

“We got it,” the general replied.”

Your tax dollars hard at work, folks, monitoring space junk!  Good for the psyche of the nation??? How so?  Can somebody please ‘splain this one to me? Lawmakers and even some members of Trump’s administration appear to be troubled, cautioning that the action could create unnecessary bureaucratic responsibilities for a military already burdened by conflicts.  Y’think?

On Sunday, The Washington Post published a story about a previously undisclosed May 2016 meeting between Roger Stone and a Russian national who promised political dirt about Hillary Clinton.  Apparently Donald Trump didn’t take the news too well, and used it as an opportunity to double down on his personal vendetta against Jeff Bezos and The Post.

There is little doubt in the minds of the sane that this is just another strike against Bezos, a response to The Post’s coverage of Trump that is not rosy and glowing, as Trump would like.  👍👍 to Jeff Bezos and The Washington Post … keep up the good work!

It’s nice to be able to deliver some thumbs-up for a change!  The State of Hawaii just became the first state in the union to ban pesticides containing chlorpyrifos, the pesticide that has been linked to adverse side effects in humans, including debilitating neurological and developmental maladies.  This in the face of Scott Pruitt, who has gone to elaborate lengths to protect the manufacturers of chlorpyrifos, which is harmful to children and farm workers.

Last Wednesday, Hawaii Governor David Ige signed the bill into law, a law which also bars the spraying of any pesticide within 100 feet of schools during normal hours of attendance.

Now, I bet you’re wondering who manufactures this lethal chemical, aren’t you?  Well, of course it is none other than chemical giant Dow Chemical.  That would be the same Dow Chemical that gave a cool $1 million to Donald Trump’s inauguration and did not want chlorpyrifos to be banned.  Shortly after the inauguration, Scottie Pruitt of the EPA announced that he would not follow the recommendation of the agency’s own scientists to ban the use of chlorpyrifos.

And now?  Now Dow Chemical has a new request.  Dow sent letters to three of Trump’s cabinet heads asking them to ignore government studies regarding the harmful effects of a group of pesticides on endangered species.  They want to bury a scientific study.  I wonder … how many lives, human and animal, can $1 million buy?  Draining the swamp?  I think not.

I sincerely hope to see other states follow Hawaii’s lead and place human life above politics and greed.

I just saw that at 5:00 this evening, Nikki Haley and Mike Pompeo will announce the withdrawal of the United States from the United Nations Human Rights Council.  This, in my opinion, is a black day in the history of this nation.  I may have more to say about it later, but as yet haven’t had time to fully process the information.  I am appalled, but then I think that we are in violation of human rights in more ways than one, so I suppose that to remain in the council would be hypocrisy.  😞

Well, that’s all for today, folks.  I haven’t run out of either snark or snippets, but have run out of time and energy.  Have a great evening!