When I read this newsletter from Robert Reich this morning, my jaw dropped.  Sure, I knew that capitalism has run amok in recent years and that We the People seem to have no value to many of our elected officials, but … even I wasn’t aware to what degree our best interests have been subjugated.  I hope you’ll take a couple of minutes to read and ponder Mr. Reich’s words …

Why isn’t corporate America behind the pro-democracy movement?

Capitalism and democracy are compatible only if democracy is in the driver’s seat.

That’s why I took some comfort just after the attack on the Capitol when many big corporations solemnly pledged they’d no longer finance the campaigns of the 147 lawmakers who voted to overturn the election results.

Well, those days are over. Turns out they were over the moment the public stopped paying attention.

A report published last week by Citizens for Responsibility and Ethics in Washington shows that over the last year, 717 companies and industry groups have donated more than $18 million to 143 of those seditious lawmakers. Businesses that pledged to stop or pause their donations have given nearly $2.4 million directly to their campaigns or leadership political action committees.

But there’s a deeper issue here. The whole question of whether corporations do or don’t bankroll the seditionist caucus is a distraction from a much larger problem.

The tsunami of money now flowing from corporations into the swamp of American politics is larger than ever. And this money – bankrolling almost all politicians and financing attacks on their opponents – is undermining American democracy as much as did the 147 seditionist members of Congress. Maybe more. 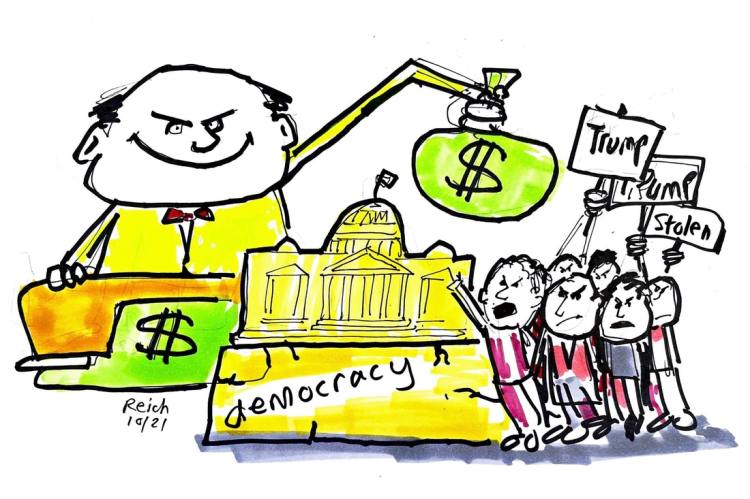 Democratic senator Kyrsten Sinema — whose vocal opposition to any change in the filibuster is on the verge of dooming voting rights — received almost $2 million in campaign donations in 2021 despite not being up for re-election until 2024. Most of it came from corporate donors outside Arizona, some of which have a history of donating largely to Republicans.

Has the money influenced Sinema? You decide: Besides sandbagging voting rights, she voted down the $15 minimum wage increase, opposed tax increases on corporations and the wealthy, and stalled on drug price reform — policies supported by a majority of Democratic Senators as well as a majority of Arizonans.

Over the last four decades, corporate PAC spending on congressional elections has more than quadrupled, even adjusting for inflation.

Labor unions no longer provide a counterweight. Forty years ago, union PACs contributed about as much as corporate PACs. Now, corporations are outspending labor by more than three to one.

According to a landmark study published in 2014 by Princeton professor Martin Gilens and Northwestern professor Benjamin Page, the preferences of the typical American have no influence at all on legislation emerging from Congress.

Gilens and Page analyzed 1,799 policy issues in detail, determining the relative influence on them of economic elites, business groups, mass-based interest groups, and average citizens. Their conclusion: “The preferences of the average American appear to have only a miniscule, near-zero, statistically non-significant impact upon public policy.” Lawmakers mainly listen to the policy demands of big business and wealthy individuals – those with the most lobbying prowess and deepest pockets to bankroll campaigns and promote their views.

It’s likely far worse now. Gilens and Page’s data came from the period 1981 to 2002 – before the Supreme Court opened the floodgates to big money in the Citizens United case, prior to SuperPACs, before “dark money,” and before the Wall Street bailout.

The corporate return on this mountain of money has been significant. Over the last forty years, corporate tax rates have plunged. Regulatory protections for consumers, workers, and the environment have been defanged. Antitrust has become so ineffectual that many big corporations face little or no competition.

Corporations have fought off safety nets and public investments that are common in other advanced nations (most recently, “Build Back Better”). They’ve attacked labor laws — reducing the portion of private-sector workers belonging to a union from a third forty years ago, to just over 6 percent now.

The profits of big corporations just reached a 70-year high, even during a pandemic. The ratio of CEO pay in large companies to average workers has ballooned from 20-to-1 in the 1960s, to 320-to-1 now.

Meanwhile, most Americans are going nowhere. The typical worker’s wage is only a bit higher today than it was forty years ago, when adjusted for inflation.

But the biggest casualty is the public’s trust in democracy.

In 1964, just 29 percent of voters believed that government was “run by a few big interests looking out for themselves.” By 2013, 79 percent of Americans believed it.

Corporate donations to seditious lawmakers are nothing compared to this forty-year record of corporate sedition.

A large portion of the American public has become so frustrated and cynical about democracy they are willing to believe blatant lies of a self-described strongman, and willing to support a political party that no longer believes in democracy.

As I said at the outset, capitalism is compatible with democracy only if democracy is in the driver’s seat. But the absence of democracy doesn’t strengthen capitalism. It fuels despotism.

Despotism is bad for capitalism. Despots don’t respect property rights. They don’t honor the rule of law. They are arbitrary and unpredictable. All of this harms the owners of capital. Despotism also invites civil strife and conflict, which destabilize a society and an economy.

My message to every CEO in America: You need democracy, but you’re actively undermining it.

It’s time for you to join the pro-democracy movement. Get solidly behind voting rights. Actively lobby for the Freedom to Vote Act and the John Lewis Voting Rights Advancement Act.

Perhaps I’m a bit simple-minded these days, but I’m really confused over something and I’m hoping someone can make sense of this for me.  The issue?  Why is it that the United States Congress can pass, relatively without argument, a bill that allocates $768 billion for a single year to the military, in large part to purchase more tanks, guns, and nuclear weapons … hardware made with the sole purpose of killing humans … but they cannot pass a bill that would help people who are struggling to keep a roof over their heads and food on the table?

To be clear, here is a summary of the major points in the Build Back Better bill (aka BBB) that congressional Republicans are determined to send to its grave:

The cost of the Build Back Better bill is $150 billion per year … just under 20% of the cost of the recently passed defense bill.  Build Back Better helps people … people who need the help whether due to the pandemic or other circumstances beyond their control, whereas the defense bill largely helps arms manufacturers.  The refusal of Republicans in Congress to even consider the BBB at this time is a huge hypocrisy and in my view is further proof, as if any were needed, that Republicans largely do not give a royal damn about the average person in this nation, including their own voters.  Their fortunes and therefore their votes are tied to the wealthy corporations and groups like the NRA, arms manufacturers, and fossil fuel industry and to hell with John Doe!

And on another, but related note, why in the Sam Hell are both of the voting rights bills stagnating somewhere in the Capitol, unlikely to see the light of day?  With nearly every state in the nation passing draconian laws that will make it harder for the average citizen to vote and damn near impossible for many who are not white middle-class males to vote, it is not rocket science to figure out that the federal government needs to step in and protect the most important right granted to We the People under the U.S. Constitution!

The two voting rights bills, the John Lewis Voting Rights Advancement Act, and the Freedom to Vote Act, are being held up by not only every Republican senator, but two Democratic senators, Joe Manchin of West Virginia and Kyrsten Sinema of Arizona.  These 52 unconscionable people either do not understand the meaning of a democracy or else are determined to undermine the very foundation of our nation and turn it into a banana republic, an illegitimate dictatorship.

The Republicans in Congress are not in the least bit bothered by spending nearly a trillion dollars of OUR hard-earned tax dollars to build more killing machinery, yet they will not lift so much as a pen to protect our rights, our very lives.  I sincerely hope that the majority of Republican senators and representatives currently sitting in Congress are voted out of office next November for they do NOT represent the people of this country!

Many … perhaps most … do not quite understand what is meant by ‘filibuster’. Our friend Jeff’s post will clarify what, exactly, the filibuster is, its origins, and how it has most often been used. Thanks, Jeff!

On The Fence Voters

There’s been much debate in recent years about the efficacy of the filibuster. The Republican Party has used the arcane process to block specific meaningful legislation that would have been beneficial to millions of Americans. To be clear, Democrats have also used the filibuster; blocking judges or presidential appointees, for example.

But it’s time to take a look at what the filibuster is, what are its origins, and what important legislation it has stopped from becoming law. A couple of things stand out. For one, there is nothing in the U.S. Constitution that mentions anything about the filibuster. It’s simply a Senate rule that’s been in place for nearly 200 years. Secondly, the process was born out of pure unadulterated racism — a mechanism that allowed the despicable practice of slavery to continue being used, mostly by wealthy white land owners in the South.

To take a deeper dive into…