Meet the new Alex Jones.  His name is Jacob Wohl, he is 21-years-old, and calls himself a “corporate and political intel consultant”.  In truth, he is a scammer and a conspiracy theorist who has been banned from Twitter and was barred from the Conservative Political Action Conference (CPAC) last week.  By himself, he is a joke … laughable.  The danger lies in that some people are actually falling for his multiple hoaxes.

So, who … or what … is Jacob Wohl?  He first came onto the scene in the middle of 2017, when he posted a lovey-dovey tweet about how ‘wonderful’ Donald Trump was and Trump, naturally, re-tweeted it for it fed his very hungry ego.  At that time, he billed himself as a ‘financial manager’, or a hedge-fund manager (at 20 years old???), and had already gained a reputation “for defrauded investors, various boffo shenanigans and a batch of regulators on his trail”, according to TalkingPointsMemo.    According to his website at the time, which is no longer in existence, he “launched his first ‘hedge fund’ at age 16 while still in high school and ‘received attention from around the world for being the youngest hedge fund manager of all time.’”

After a 2017 investigation into fraudulent practices and complaints about thievery, the National Futures Association (NFA), a non-governmental industry watchdog, banned Wohl for life from the NFA or operating as a principal for any NFA member.  The State of Arizona has banned him from all business activities in their state.  There are numerous instances of his dishonesty, nay … thievery … but that is not my purpose today … my purpose today is his present scam.  Not even ‘of age’ yet, and one career already shot to heck.

You’ll remember the unsubstantiated and false rumour that Donald Trump started in 2011 where he posited that President Obama was not, in fact, born in the U.S.?  Well, Wohl started his own ‘birther’ rumour …

“Kamala Harris is NOT eligible to be President. Her father arrived from Jamaica in 1961—mother from India arrived in 1960.  Neither parent was a legal resident for 5 years prior to Harris’s birth, a requirement for naturalization.  Kamala was raised in Canada.” — Jacob Wohl (@JacobAWohl) January 22, 2019

The facts:  Ms. Harris was born in Oakland, California, in 1964, thereby making her a citizen of the U.S.  When she was twelve years old, her parents had been divorced for five years, and her mother took the children and moved to Canada.  In 1981, Mr. Harris moved to Washington, D.C., to attend Howard University where she majored in Political Science and Economics.  After graduation from Howard, she returned to California where she earned her Juris Doctor (J.D.) from the University of California, Hastings College of the Law, in 1989.  She meets every criteria for the office of president, contrary to Wohl’s suggestion, and is, in fact, far more qualified than the current occupant of the Oval Office.

Wohl also set his sights on Supreme Court Justice Ruth Bader Ginsberg after her recent cancer diagnosis, claiming she was either secretly dead, or in a vegetative state from which she would never return.  I wonder how silly he feels now, seeing that she has returned to the bench?

He also claimed that the pipe bombs sent to a number of democrats last year were a ‘false flag’ operation.  I wonder how he explains the arrest of Cesar Sayoc last October and the 30 charges against him for making and sending the bombs?

And just before the mid-term elections last year, he claimed to have ‘proof’ that Special Counsel Robert Mueller had been credibly accused of sexual assault.  Another blatant falsehood, the product of Wohl’s imagination, as even the woman he claimed had accused Mueller, one Carolyne Cass, said that Wohl “made it up,” deceived her with a false identity and tried to coerce her to appear at a news conference against her will. That one put him on the radar of the FBI.  And one of his most infamous tweets was his claim that Donald Trump should be made “president for life” … oh, the horror!!! 😱 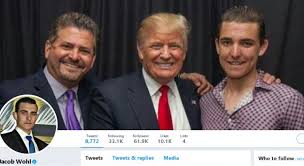 His latest conspiracy theory centers around the freshman representative from Minnesota, Ilhan Omar.  He claims that Omar’s ex-husband Ahmed Elmi is actually her brother and that she married him to help him get US citizenship.  There is absolutely no evidence to support his claim, and it wouldn’t make sense anyway, for she could have just as easily petitioned US Citizenship and Immigration Services (USCIS) to bring her brother to the U.S. without marrying him!  But, Ms. Omar is the target of a number of conspiracy theories, including one that she has some connection to the 9/11 terrorists.  Again, there is no evidence at all to support this, but she is an easy target because … she is a Muslim, one of the first two Muslim representatives in Congress, and Trump’s supporters believe his lies that all Muslims are terrorists.

Wohl has gone so far as to connect with right-wing activist Laura Loomer, solicit funds equal to $25,000 to travel to Minneapolis to attempt to prove his claims.

He and Laura claim they are being targeted, wear bullet-proof vests, and claim they need an armoured car for their protection.  More likely, nobody recognizes nor cares overly much about them.

But by far the most concerning thing he has done is that which got him banned from Twitter.  According to an article in USA Today …

Wohl disclosed a raft of schemes he says are in the works that he hopes will resonate in the run-up to the 2020 presidential election.

He says he plans to create “enormous left-wing online properties” – such as deceptive Facebook and Twitter accounts – “and use those to steer the left-wing votes in the primaries to what we feel are weaker candidates compared with Trump.” It’s a plot similar to what Mueller has charged in indictments that the Russians crafted in an effort to boost the 2016 campaigns of Bernie Sanders and Jill Stein and hobble Hillary Clinton.

Another stated scheme: seeking to collect damaging information on left-leaning non-profits including Media Matters for America, the Southern Poverty Law Center and Right Wing Watch by offering their insiders “moral reconciliation,” and if that doesn’t work, “things of worth” – such as money.

Wohl said he planned to create “enormous left-wing online properties” in a bid to steer voters “to what we feel are weaker candidates compared with Trump.”  Twitter’s investigation found Wohl already had created some of those accounts, including @women_4_schultz, which sought to advance the early candidacy of Howard Schultz, former Starbucks CEO who has threatened to run as an independent in 2020.

While Twitter has permanently suspended Wohl’s account, there are other social media platforms, such as Facebook.  I understand that he is a large presence on Instagram.  I found his response to his lifetime ban a bit chilling …

“It’s all fun, man. You gotta have fun with this. I had fun with Twitter. They banned me? Oh well — it’s not the end of the world.”

We need not fear people crossing the southern border seeking asylum.  We need not fear Muslim refugees from the Middle East.  We need to fear the likes of Jacob Wohl who have set out to tamper with our elections, who are filling empty minds with conspiracy theories against good people, and who are seriously trying to bring about the fall of this nation.  This, then, is the face of ugly …