A number of things are flitting across my radar tonight … nothing very major, just little things. Overall, I am enjoying the professionalism that is coming from the Biden administration.  No hateful tweets, no ‘breaking news’ parroting what the prez has said/tweeted/eaten in the past 30 minutes.  We once again have intelligence and compassion in the White House and I am comforted by that.  But, of course, that doesn’t mean I can’t find something about which to snark!

Some Republicans have sense!

I am neither a Democrat nor a Republican, though I lean strongly toward the ideology of the Democratic Party and if I didn’t prefer my Independent status, I would almost certainly register as a Democrat.  In fact, I’ve strongly considered doing so, but … I really don’t want the bombardment of emails and phone calls that any political party subjects its registrants to.  That said, I have absolutely no use for the ideologies of today’s Republican Party, for they seem to be aligned with conspiracy theories and policies that place profit over people and that are largely bigoted in so many ways.  I do, however, subscribe to one Republican newsletter that I find has merit and has led me to believe that there are still at least a few sane heads in the Republican Party.

The newsletter is published by Sarah Longwell of Republicans for The Rule of Law, and while quite often I only give it a cursory glance, yesterday’s had something that I found very satisfying.

Today, we launched a new $1 million campaign to support the 17 courageous Republicans in Congress who voted to impeach and convict Trump. We are putting TV ads and billboards in their home states and districts, thanking them for doing the right thing.

It’s hard to overstate the risk many of these men and women took when they voted to hold Trump accountable. Most are already facing attacks from Trump and his supporters, and many will have to deal with well-funded primary challengers when they run for reelection.

The only way to protect our democracy is to engage voters directly, and this new campaign does just that.

Now is the time to stick up for all Republicans who did the right thing, whether they’re retiring this year or facing the fight for their political lives in the next. Now is the time to let America know that we refuse to cede the Republican Party to Trump and Trumpism. 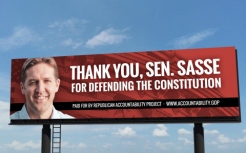 And one of the 30-second television ads …

If the GOP has a future, and I find that very much in doubt at this stage, its future lies with these men and women who do not put party loyalty above their Oaths of Office, do not pander to the wealthy and criminals in the party at the expense of the people of this nation.  Thumbs up to this group of conscionable and conscientious Republicans!

How the hell did he get here?

Madison Cawthorn is his name, and he is only 25 years of age … younger than my granddaughter … yet he is a member of the U.S. House of Representatives from the state of North Carolina.  Cawthorn is the youngest person to serve in Congress since Jed Johnson, Jr., who served a single term from 1965-1967.  I think that perhaps Mr. Cawthorn won on a sympathy vote – due to an auto accident, he is partially paralyzed and uses a wheelchair – for he damn sure didn’t win on intellect.

I’ve known some pretty sharp 25-year-olds in my day, but this kid is not among them.  There have been a number of allegations of sexual misconduct against Mr. Cawthorn, though none have filed charges so far.

His latest episode of lunacy, though, came today when he saw a tweet saying that the Vatican is requiring all personnel to receive the vaccine or lose their jobs …

So, apparently he isn’t quite clear on what the Vatican is, or thinks that somehow the U.S. has jurisdiction over it.  Not criminal, of course, but foolish and it shows his lack of understanding, lack of education, and lack of being mature enough to hold a seat in Congress, the lawmaking branch of our government.  Frighteningly, he serves on the House Committee on Education and Labour.  We surely do not need him helping to shape our policies on education!

Like Marjorie Taylor Greene and Lauren Boebert, I suspect young Cawthorn will be a single-term representative, so perhaps he should be thinking about what he’d like to do with the rest of his life.

A Republican and a Democrat are walking down the street when they see a fight between two young black men.  The Democrat walks over, tries to separate the two young men and asks what the problem is, then he tries to get them both to calm down and discuss this reasonably.  The Republican, on the other hand, says, “Let me get my gun!”

A Republican and a Democrat are walking down the street when they see a group of Black Lives Matter protestors holding signs.  The Democrat walks on by, nods to them and gives them a thumbs-up.  The Republican says, “Let me get my gun!”

There are many philosophical and ideological differences between the two major parties in the U.S. – there always have been – but some of the biggest are exemplified in the examples above:  the gun culture, propensity to violence, and racism.

Republican politicos seem to think that appearing in ads with guns, threatening violence, is the way to win votes and influence people.  A few examples …

I am told that this is to make them appear ‘tough’, but in my book it makes them appear to be cowards, for only a coward, a person afraid of something all the time, feels a need to carry a gun.  I’ve managed for 69 years without ever picking up a firearm, have even faced down a gun twice, and still never felt a need to own one.

Another thing that separates the two parties is the attempt to eliminate the opposition in unsavory ways.  I cannot recall a story about someone plotting to kill a republican candidate or official, but the attempts on democrats of late has been astounding.  It seems that republicans are far more in favour of solving their problems with violence than democrats.

And just this month the Federal Bureau of Investigation uncovered plots to kill the democratic presidential candidate Joe Biden, and to kidnap the democratic governor of Michigan, Gretchen Whitmer.  Funny, but I haven’t heard of any plots to kill Mitch McConnell, or kidnap Florida’s governor, Ron DeSantis.

And lastly, let’s talk a bit about racism as it is viewed by the two parties.  According to a 2019 PEW Research study, a majority of Americans (56%) say Trump has made race relations worse; just 15% say he has made progress toward improving race relations, while 13% say he has tried but failed to make progress and 14% say he hasn’t addressed this issue.

But what really shines a light on the differences in the way members of the two parties view race and racism is the acceptance or denial that racism even exists in the U.S.  This chart tells the story …

There are many principles and ideas that divide the two parties, and until we find ways to narrow those divisions, to work together, to understand each other and to find common ground, we cannot begin to heal this nation.  We look to the leadership of the nation, our elected officials, to find that common ground, to stop the hating, the violence, and to ensure that every person in this country has an equal opportunity, that guns are regulated in such a way to ensure the public safety, and that violence is strongly discouraged.  For the past four years, the ‘leader’ of our government has encouraged violence, racism, and the gun culture, and this simply must stop, for we are on the brink of becoming a third-rate nation if it doesn’t.