Joni Ernst is a U.S. Senator representing the state of Iowa.  Ordinarily, I would respect and admire this woman, for she served for 23 years in the U.S. military.  Ordinarily, given her military service, I would even be able to look past the fact that she is a republican.  But, when somebody starts trying to rob me and millions of other people, they lose my respect real fast.

Before I get into that, let’s take a look at Ms. Ernst and some of the things she stands either for or against:

All of the above is enough to make her unsuitable to be in the U.S. Senate, but the latest takes the prize.  A week ago, during the congressional recess, Ms. Ernst held a town hall meeting with constituents in Estherville, Iowa.  During the course of that meeting, she said that members of Congress should negotiate changes to Social Security “behind closed doors” in order to dodge scrutiny from the media and advocacy groups.

Please, Ms. Ernst, allow me to explain a couple of things to you.  First, every single thing you do in your job, every single word you utter, should be recorded and reported by the media.  Why?  Because you work for us, not the other way around.  We have a right, nay … we have a need … to know everything that any member of our federal government does.  Today, with the most corrupt and ignorant president in the history of the nation in office, that need is even more imperative, for you and others of your ilk have proven time and time again that you do not have the best interests of this nation and its people at heart.

Second, perhaps you don’t understand about Social Security, but WE fund it, just as we fund your salary.  Yes, WE!  Out of every paycheck we earn throughout our entire life, 7.65% is withheld … 6.2% of that is to fund our government-managed retirement account, and the other 1.45% is to fund Medicare.  Our employers match our contributions, dollar for dollar.  Neither Social Security nor Medicare are “entitlements” that the government giveth and thus can taketh away!  I see that you have a Master of Public Administration degree from Columbus State University, so how do you not understand such a simple concept???

I do not live in Iowa, so I cannot vote this woman out of the Senate, however she IS up for re-election next year, so if any of my readers hail from Iowa, or if you know of anybody who lives in Iowa, please encourage them to vote this harridan out of office, and Steve King, too! 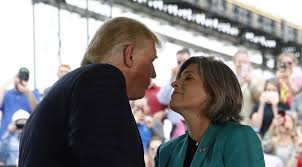 Trump & Ernst — on the campaign trail

Joni Ernst is not alone in wishing to cut Social Security and Medicare.  In August, Senator John Barrasso, a republican from Wyoming told the New York Times that his party has discussed cutting Medicare and Social Security with Trump and said the president has expressed openness to the idea.  The Times also reported that Trump said it was “a second-term project”.  And republican Senator John Thune from South Dakota, reportedly said it is …

“Going to take presidential leadership to cut Social Security and Medicare, and it’s going to take courage by the Congress to make some hard votes. We can’t keep kicking the can down the road.”

What ‘can’???  You take our money for the 50 years or so that we are in the work force, you invest it and, assuming you invested it wisely, you get a return on that investment, and now you don’t wish to give it back?  It’s a paltry enough sum that we get back as it is!

Folks, I could list at least 100 good reasons that this nation cannot afford to re-elect Donald Trump in 2020.  This is just one, but an important one – a crucial one.

Sometimes it simply is not necessary to “re-invent the wheel”.  I began working on a post for this blog several days ago, attempting to define the term “Democratic Socialism”, in hopes of putting to rest the many misconceptions that surround the ideology of Bernie Sanders.  It has been a struggle, as there are as many ways of defining it as there are Skittles in a pack, and my post de-railed when I realized that I had written over 3,500 words and still not quite made the point I was trying to make!  Then I discovered an article on http://www.egbertowillies.com, an “alternative news” website that provides as good an explanation as any I would write, so what follows is a “slightly condensed” version of that article. I have shortened it from the original and added a few of my own comments for clarification (italicized). If you prefer to read the entire article, I have included the link below.  Please note the site does contain ads and funding requests. 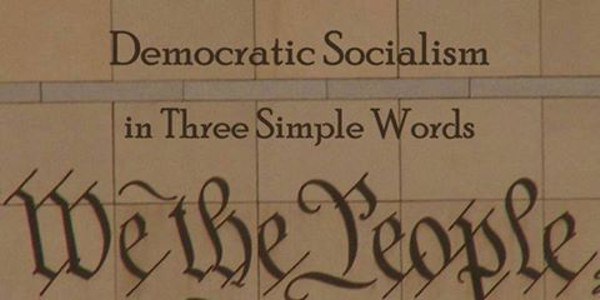 The Red Scare over the success of Bernie Sanders’s campaign has begun. Sanders and his supporters are now expected to explain on a regular basis why it is that socialism isn’t going to destroy America and how any of his policy proposals will be paid for. Oddly, none of the Republicans running for president or their supporters are expected explain how they will pay for all of the wars they apparently want to fight or how all of their tax plans that include enormous tax cuts for the wealthy won’t add to our deficits and debt.

Because Bernie proudly wears the “democratic socialist” label to describe his political philosophy, people now equate his policy proposals with socialism as an economic system. The most basic definition of socialism, taught to secondary students across the country, is that socialism is an economic system where the means of production (and distribution) are publically owned by the state whereas in a free-market system the means of production are privately owned by individuals. Only one of Bernie’s proposals involves the government taking over a private, for-profit industry, and that is health care insurance. The doctors and hospitals would still be privately owned, but the payment method for medical services would be a single-payer Medicare for All program.

Who is more free: the person who has to choose between quitting their job in order to have children, paying for full-time daycare, settling for part-time work, or the person who can stay home with a newborn, receive a portion of their income, and then return to their job?

For equal opportunity and the pursuit of happiness to be a reality, individuals have to come together and pay for the programs, services, and opportunities that enable people to pursue their goals. In the globalized, competitive economy of the 21st century, where middle class wages have not been able to keep pace with the rising costs of child care, health care, and higher education, it is now time for the United States to enter the third phase of constructing a social welfare state that enables individuals to develop their potential and live fulfilling lives (and thus have the capacity to add value to the nation).

The first phase was FDR’s New Deal and the creation of Social Security. The second phase was LBJ’s Great Society and the creation of Medicare and Medicaid. The third phase began under Barack Obama and should continue under Bernie Sanders with the creation of paid family leave, publically-funded higher education, and expansions of Social Security and Medicare. The Republican Party argues that we should cut social spending, privatize existing social programs, and cut taxes in order to achieve economic growth. The problem with this approach is that no amount of economic growth will increase wages enough to enable working class and middle class families to pay for child care, Pre-K, and higher education on their own. (highlighting added by Filosofa)

The choice that Americans face is whether they think the free-market can be trusted to create the conditions within which individuals can provide everything for themselves, or whether it makes sense given new economic realities to begin publically-funding important programs in order to guarantee equal opportunity. The economic pie can obviously still grow, but it is unclear whether the gains from that growth are naturally distributed in such a way that working and middle class families can succeed.

Recent history, not simply the recovery from the Great Recession, but fiscal and social policy since the 1980s, indicates that without government programs that consciously direct economic gains towards child care, health care, and education the working and middle classes will struggle to afford those things that make live [sic] enjoyable while a small minority amasses more income and wealth than they could possibly ever need or spend in their lifetimes.

Bernie’s “democratic socialism” is about rebuilding the middle class that used to exist before tax cuts and spending cuts shifted more wealth towards the top and more costs onto working and middle class families. It’s pretty simply, those at the top have become wealthier than ever while everyone else struggles to pay for the things that they used to be able to afford while still saving money for retirement. The American Dream has been under attack for awhile [sic] now. Those who benefit from this redistribution of wealth towards the top will try to scare you away from the solutions to the problems facing us by arguing that “socialism” will destroy our economy. Tell them that the “socialism” of Franklin Roosevelt, or even Dwight Eisenhower for that matter, sounds just fine to you.